Friendship to rule them all...
https://shatteredstar.com/forums/

by M.Steiner
I've glamoured older dungeon/class gear sets before today, usually when I've been lower level and I'd be wearing a mishmash of different coloured armour pieces which looked awful together otherwise lol. It has only been for short amounts of time though until I leveled a bit more & picked up another set I liked, and it was always full sets rather than mixing & matching.

Hitting lvl 80 in ShB and being a little disappointed with the look of some of the healing gear (for me, the 430 set from the MSQ (and the lvl 79 dungeon set before it) look better than the sets at 440, 450 & 460), I decided I'd glam up for a while - picking out some different pieces which I thought went well together & suited my character. This is what the 450/470 healer gear looks like from Eden btw:
Show

Yeah..... (Some of the other class' gear looks nice though, just not mine unfortunately lol)

Anyway, I came up with these two glamours which I'm currently alternating: 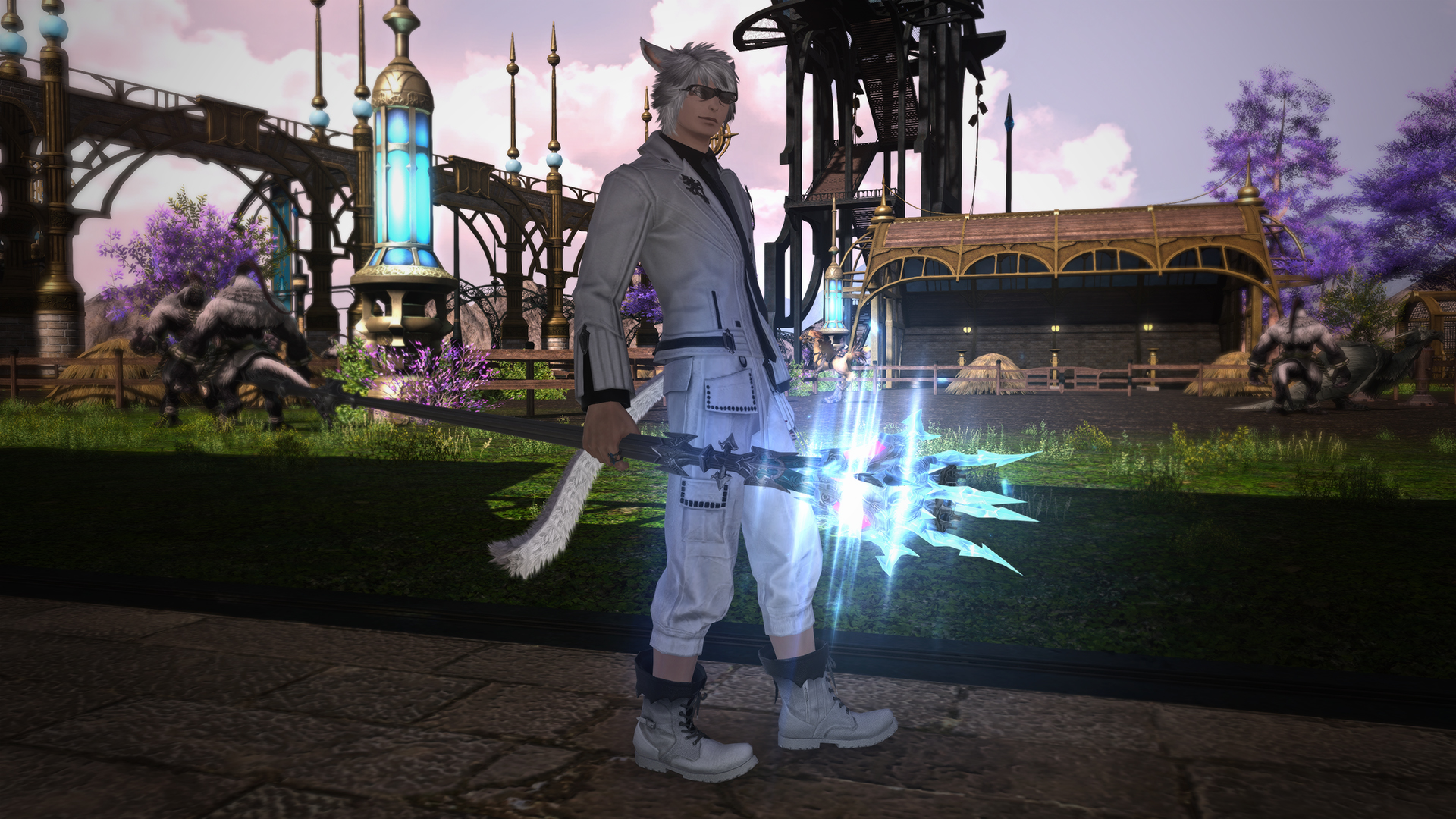 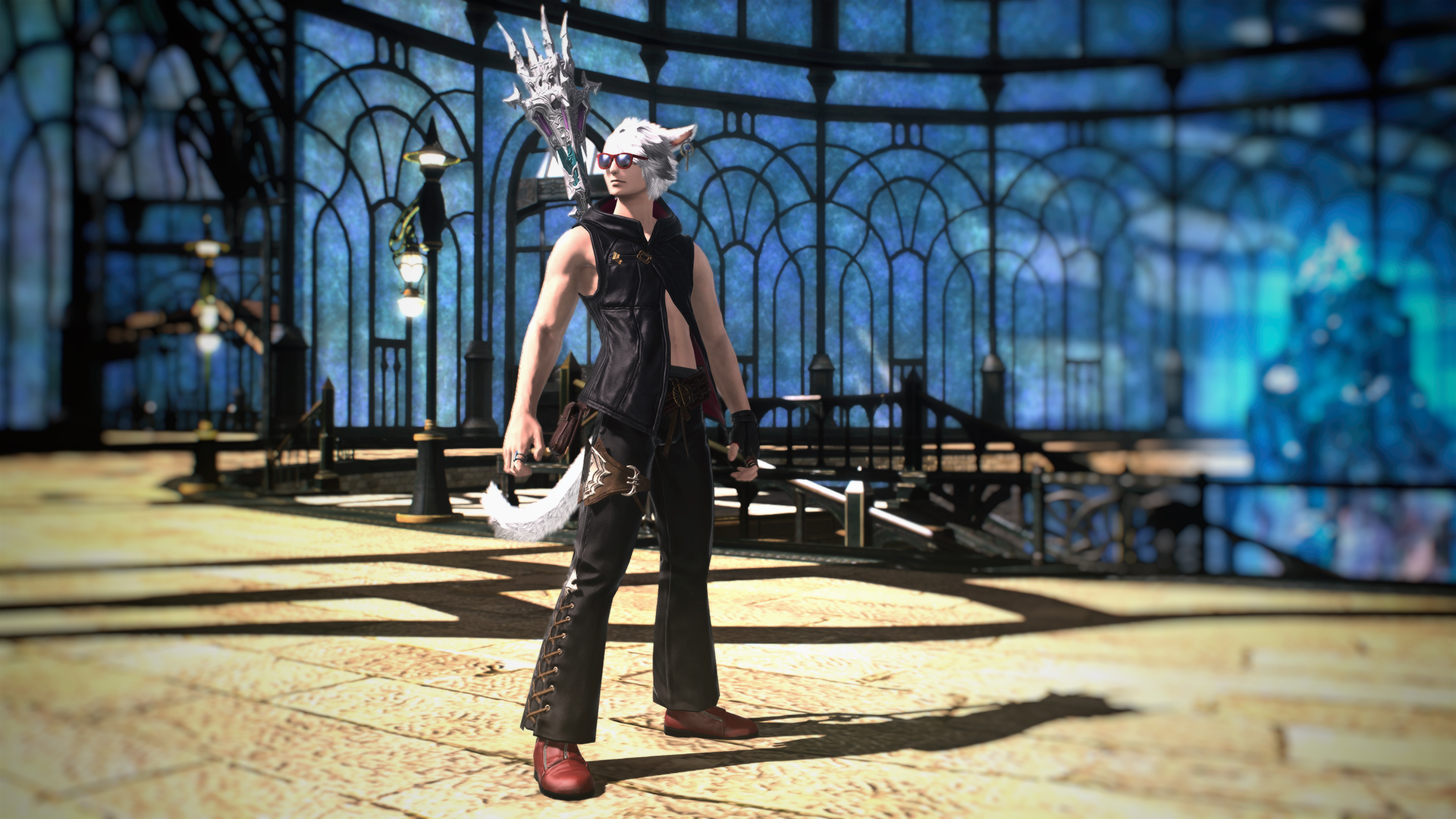 I didn't realise until I really started looking around at all the options available that glamour is definitely as much an endgame (as far as money goes) as housing or crafting. Infact, I spent more on glamour #2's body piece than I did on my small housing plot & its furniture combined

Love how much you can customize your look though. It used to get so boring in some MMOs where you'd walk around and see so many of the same armour sets from whatever dungeon. Ofc you still get that in FF to a degree but being able to wear some boots from this set, with pants from another etc (and also being able to dye lots of them) whilst keeping the stats of your "current" gear, really opens things up. So good!

Edit: Decided to stick with the second glamour (using the first one for gathering) so made a couple changes: 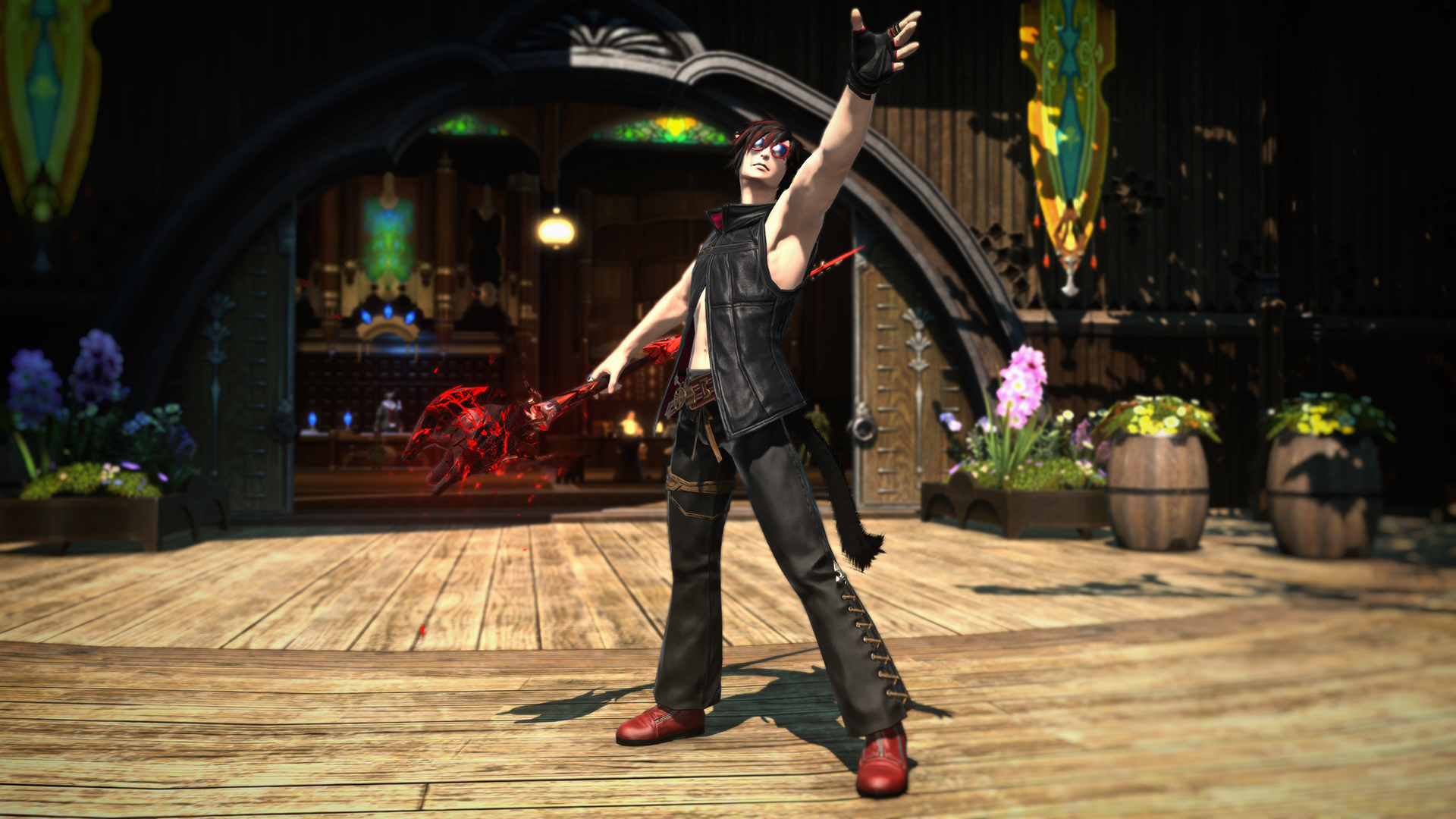 by M.Steiner
Got the Anima weapon I've been after! 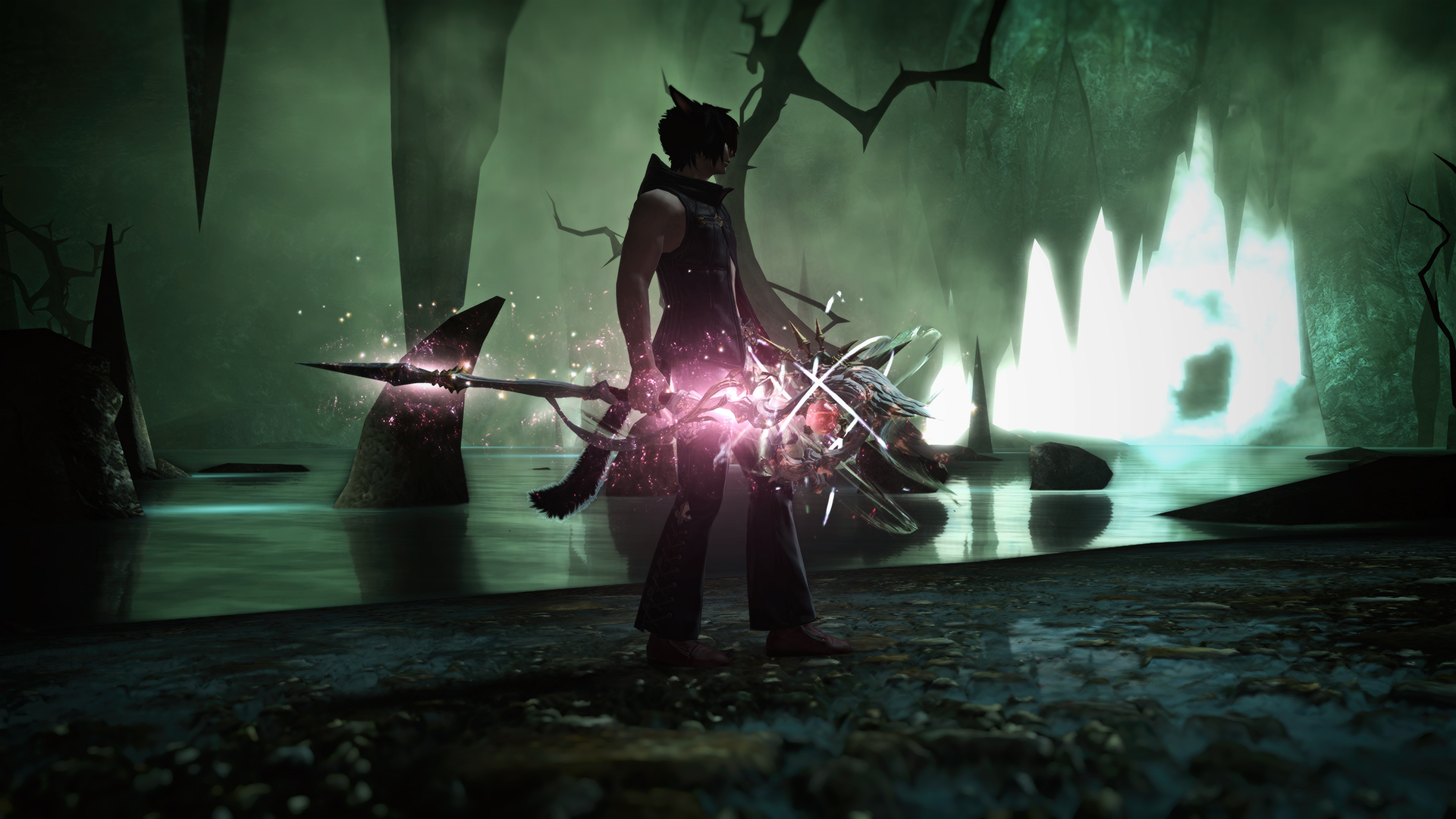 by Anubis
That anima weapon looks incredibly cool! How long did it take to get it?!

How long? Actually, less than a week. It was a busy few days though lol. I'm currently putting aside some of the required items (which you buy with poetics for several stages) to get a PLD anima

There are 2 final stages to it which transform the weapon again:

I much prefer the model I have though so I'm thinking I won't bother picking up the quest for those & grinding them out. At least not atm.

Only downside for me atm (now that I use glamour plates to apply a full body glamour in one go) is that you can't put the original anima weapons in a glamour dresser for use with a glamour plate, you have to manually use a glamour prism each time you need to update it - No biggie atm though as I'll be getting my 460 weapon on Tue and that's the highest lvl one I'll be able to get on WHM for now. When you complete the stage ahead of where you are though you can get a "replica" version of the previous stage (since you have to hand the original version of that previous stage in to transform it again). You can put these replica versions in a dresser, but I'm gonna need to complete the next quest which is more grind heh. May do in the future though, will see.

M.Steiner wrote:I'm currently putting aside some of the required items (which you buy with poetics for several stages) to get a PLD anima

Here's anima #2 and my PLD glamour 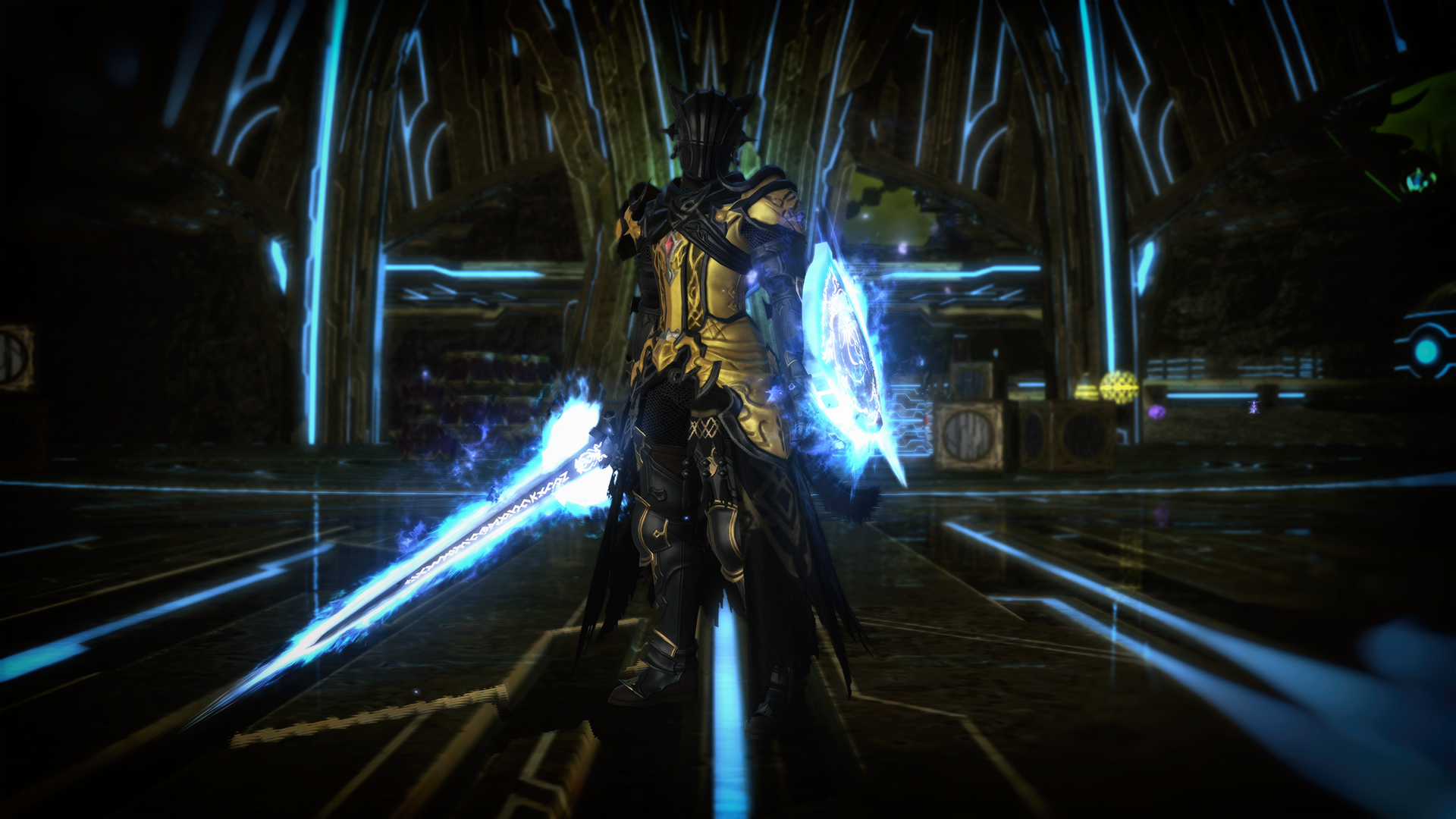 by Anubis
That PLD glamour is AMAZING - I love the weapon and shield glow effects!!!

This is the final version of the weapon/shield: 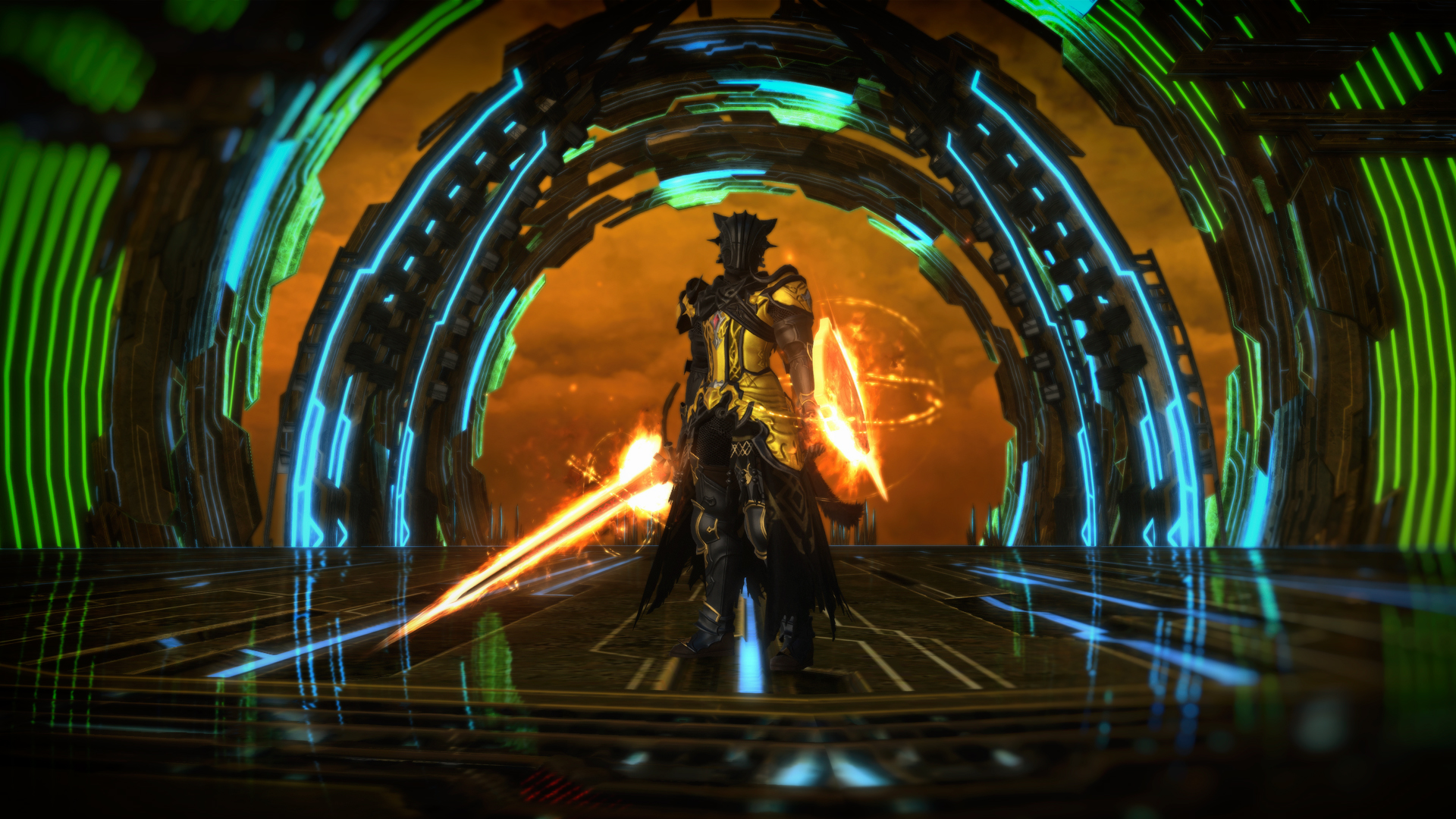 Both go well with my armour glam so hard to decide which I like best lol. May end up alternating, or using one from each or something lol. Either way - Quest complete! Ty once again for your help this evening bud and do shout if you decide to go for an anima yourself as I said ingame, will come help! <3 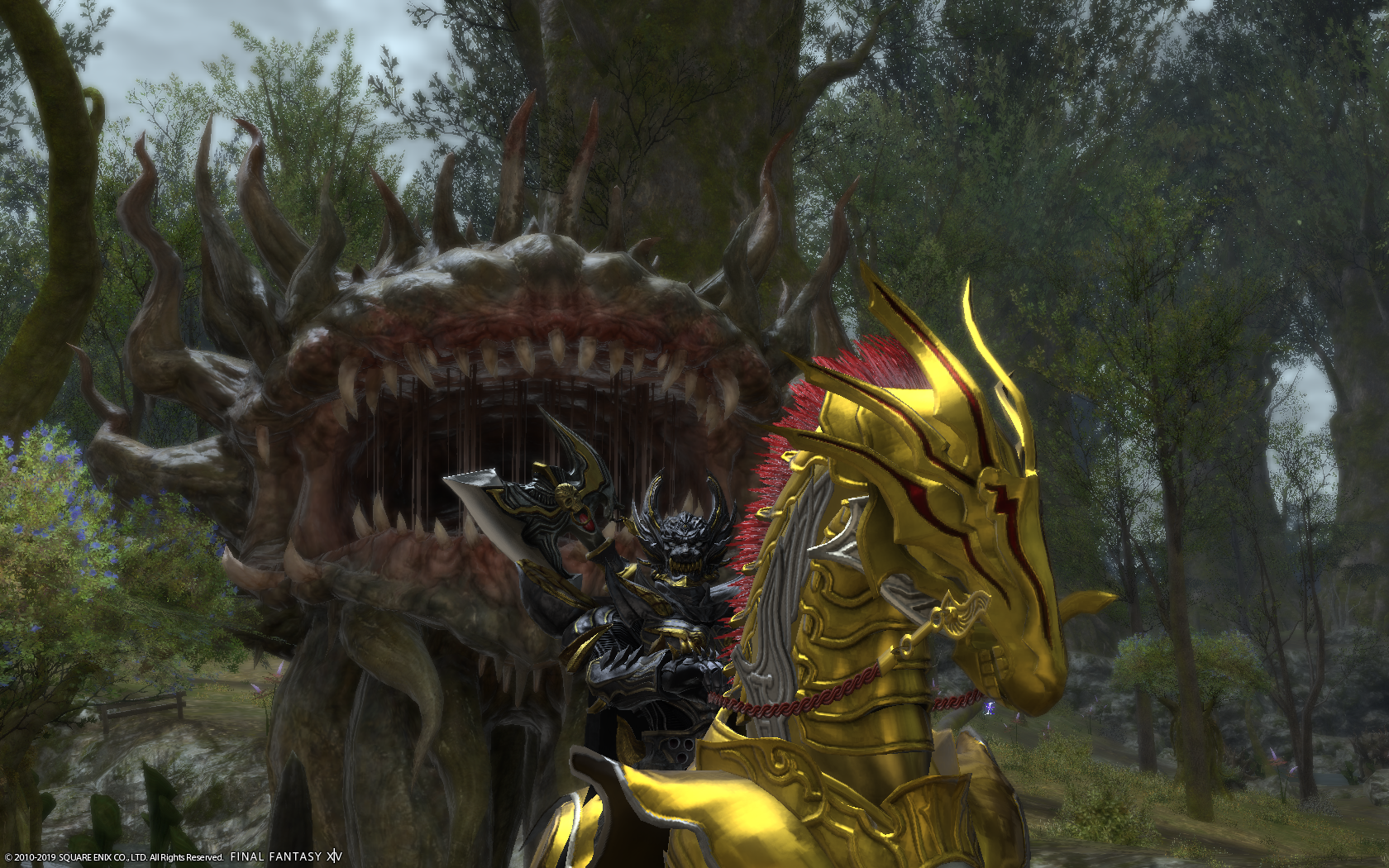 by M.Steiner
Weeee, nice job! You got that much faster than I anticipated 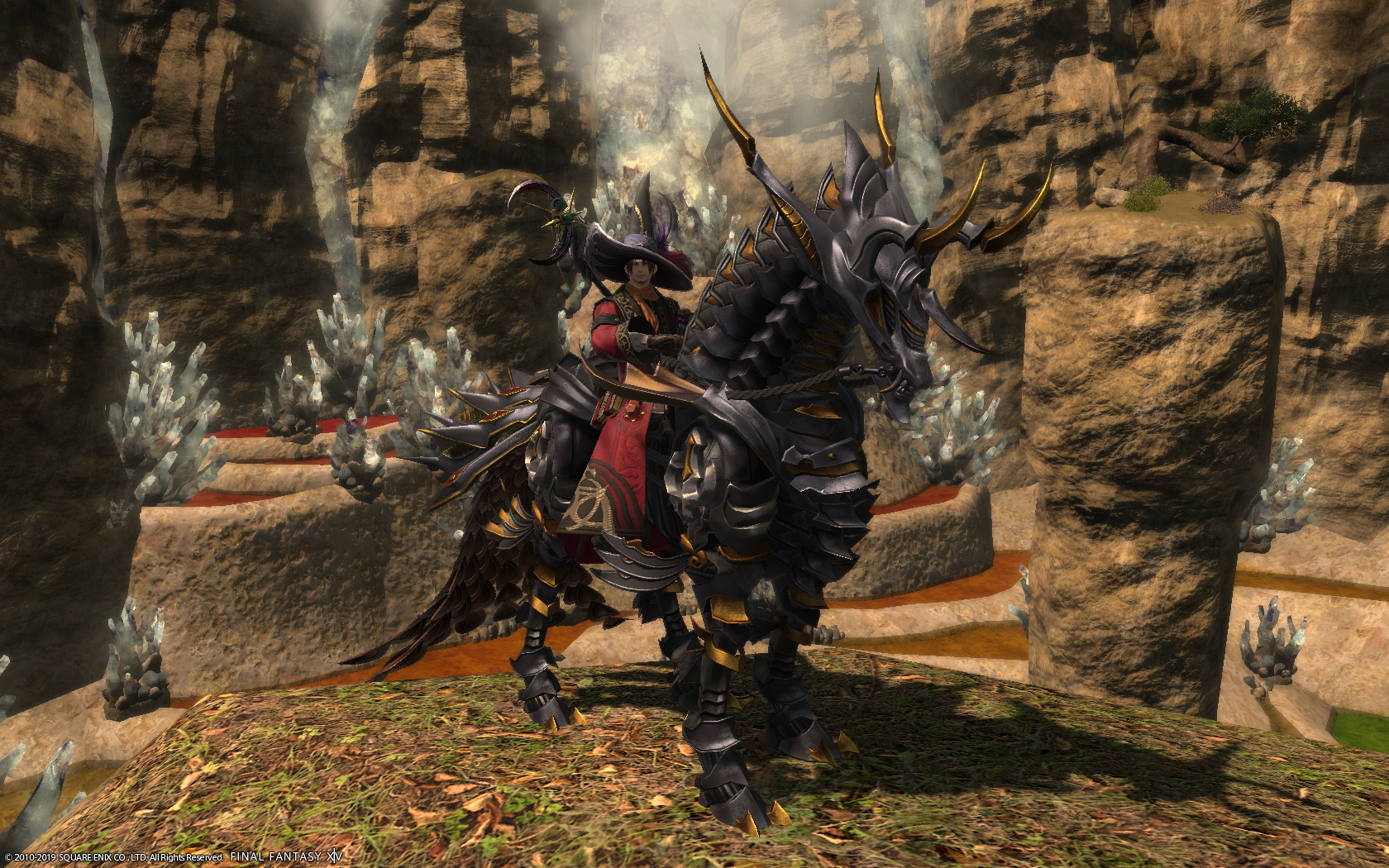 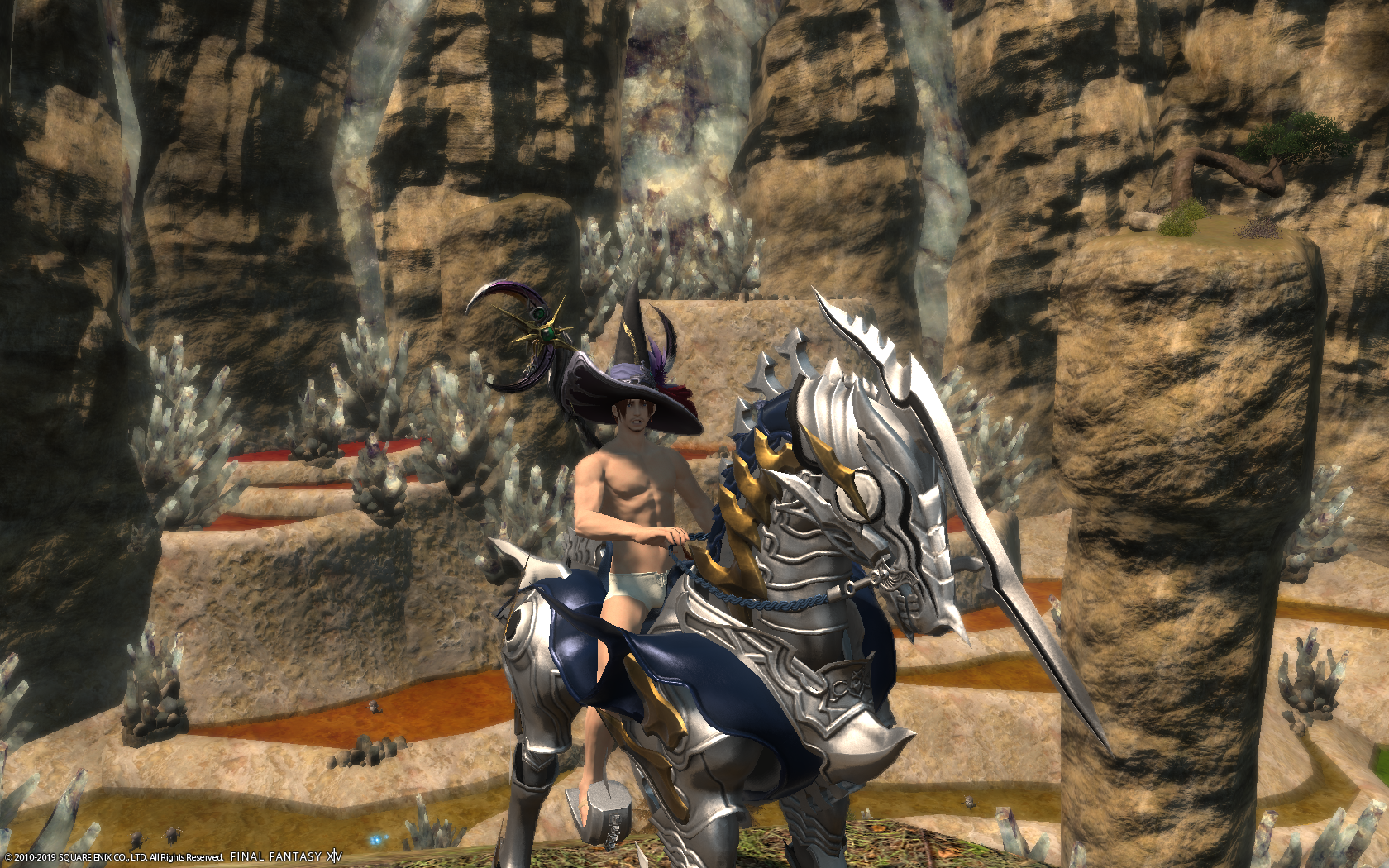 by Isileth
Also I just managed to catch the Odin FATE for the second time letting me buy this. 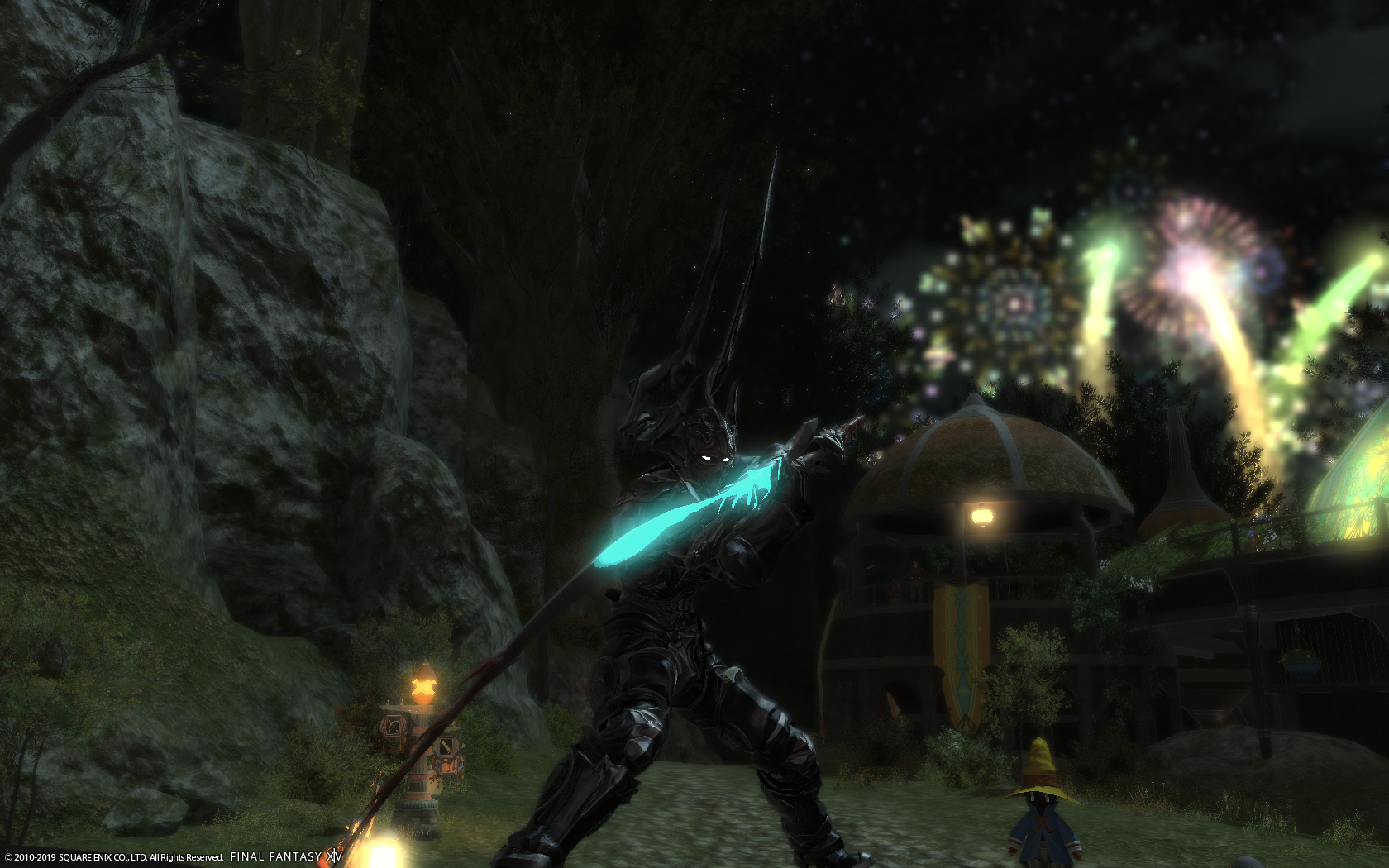 by M.Steiner
Grats! Which is your favourite of the 3 mounts then? Ginga (Silver), Goten (Gold) or Raigo (Black)?
I'm still missing Goten myself but Raigo was the one I specifically set out to get (and naturally got Ginga during the process) so I wasn't massively fussed about missing that one. May see if I can get it before 5.1 though just so I have all 3, will see.

Can't remember ever actually seeing that armour before! Do you have the Chocobo barding from the Odin FATE too? I didn't pick the armour up as I didn't have a class that could use it back when I last did it but I did get the barding and used that for quite a long time 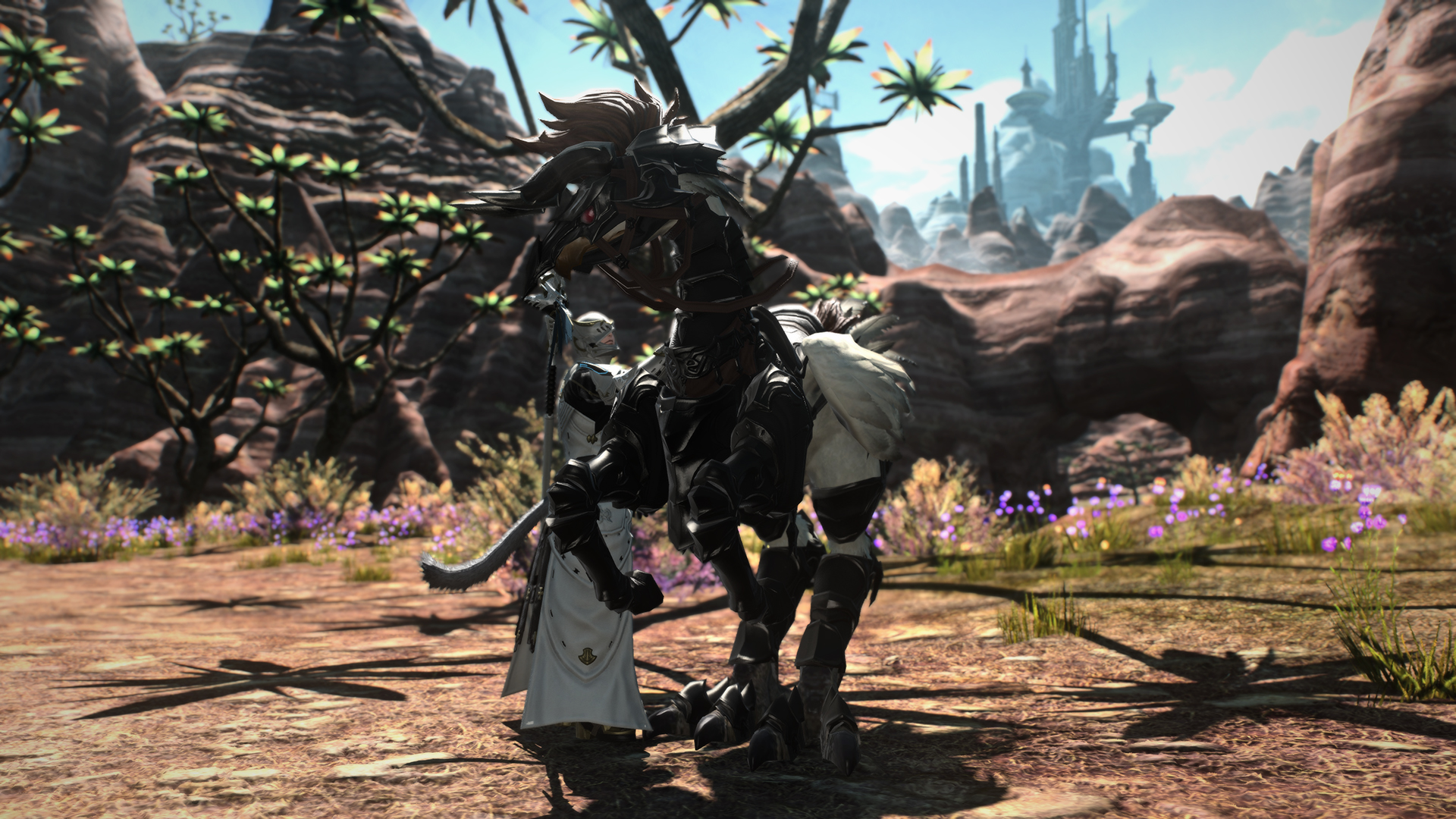 Changed to this in ShB: 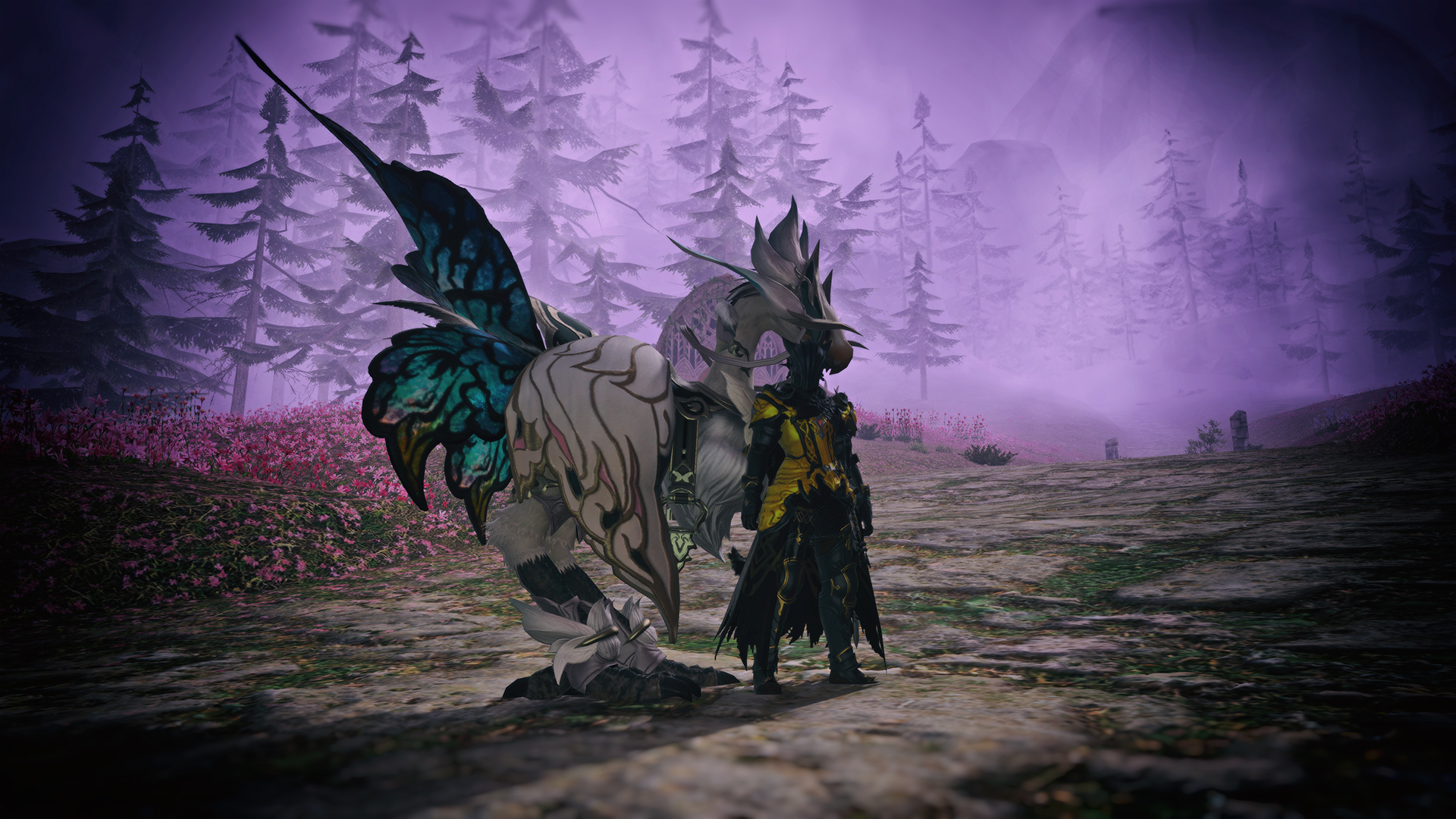 by Isileth
I had intended to use the silver one Ginga as from the pictures I saw that was my favourite, but its Raigo the black one hands down, especially when paired with my WAR or DRK wearing their dark armours.

As for Odin that was only the second time ive managed to find him so the armour took all my drops, next one would be the barding with the PLD weapon last since thats not a class ive touched, shame that it is locked to just that one class.

I managed to grab Foxy Lady twice but cant trade in until the end of Stormblood MSQ and for the first time ever I got Prey Online which I had never even seen called out before. I do need to do it once more though to afford the horns. Then Ixion is still in an area I dont have access to yet and I just need 4 more Coeurlregina horns to have that set complete. So making good progress with them.

Managed to get another Primal mount so just 3 left from HW though I havent been able to get into a single team for either of the two im yet to do synced, I will have to decide if I give up and just jump into a mount farm team on those once I have only them left.

Also ive been seeing that butterfly barding around a bit and really like it, especially when the chocobo has had its colour changed.

by M.Steiner
Which HW primal mounts do you have left to get?

I've still only gotten the ones from Ravana (did solo) & Bismarck (duo with Anny) so far but I've just looked again and there are solo kill videos on YouTube for Nidhogg, Sophia, Sephirot & Thordan now (there are also a couple duo lvl 70 vids of Sephirot pre-ShB too, along with a lvl 70 trio of Nidhogg) so I'm gonna try do those unsynched on PLD once I'm 460 with that job (eventually, need to finish getting 460 WHM stuff first & the tomestones are weekly capped atm). I've not watched all the vids yet but Anny, yourself and I should try those as a trio

by Isileth
I have done Thordan but need the mount (I now have 30 fragments so not had the best luck with that one), I have only ever queued into Nidhogg once and never into Zurvan.

by M.Steiner
Actually, just found a duo Zurvan EX vid (PLD/SCH). May depend what jobs we're doing it with but could potentially add that to our list to try as a trio later on